News Year Ever, 2011, I found two kittens in my back yard. We have a large back yard with a parrot aviary under the trees, and as I walked to the aviary, I caught a flash of something moving out of the corner of my eye. I peered around the back and there were two small kittens, about 7 weeks old. They were terrified, starving and crying. I ran back to the house and got food. I placed the food bowl a few feet from where they stood and stepped back, and as soon as I did, they ran to the bowl and in a very short time had eaten a half a can of mince and drunk a bowl of milk. It had been a very hot day and they had obviously been in our yard for at least that day, if not longer, the poor little things were desperate and exhausted. I sat near them for a while and watched, leaving them in the spinach patch.

I didn’t know if they would still be there the next morning, but gathered up the food and went to the spinach patch, and there they were, waiting for me by the empty food bowl. Again, they ate everything, then they played around me, while I talked to them. They were happy to be near me, but not too close. This continued for a few days, until about the 5th day they had moved themselves closer to the house, and were playing in a garden bed near the back door. For another 2 weeks our pattern of feeding and playing, with my family watching and interacting continued – by now we could touch them, but only for a small amount of time, with the black kitten being more cautious than the white kitten. The black kitten, while cautious, was also the more adventurous of the two, and one night, he led them into the house, following one of my older cats inside. They were responsive but very wary, they always came when I called them and we spent a lot of time in the garden talking and playing with them.

I decided I needed to take them to the vet to be vaccinated and given a general health check. So I made the appointment for a Tuesday morning. All night I worried about how I was going to actually pick them up and get them into the cat carrier, because they were happy to be near us but we couldn’t pick them up. I needn’t have worried. In the morning I opened the door to the outside, more with the intent of just getting some fresh air inside. I was at the sink, and Cairo, my beautiful, lumbering, fluffy cat wandered in, with the kittens following. So I quietly closed the door, and let them play, while I collected the cat carrier. When I brought that inside, they both knew something was up. I scooped them up and got them inside and to the vet. When we came home, they were very wary of me, and this night they were going to spend inside, as they were going to spend every night inside from now on. I opened the cat carrier,and once they had eaten they started seriously playing and exploring the house and eventually fell asleep. This was a new dimension of the kittens I hadn’t seen before, and was lovely.

Next morning I discovered that they hadn’t used the litter tray, however, they HAD used the lounge room rug. Hmmm what to do? I had bought litter tray crystals, and showed them the tray, raked my fingers through it so they could hear the sound and smell it. They were interested, but only saw the litter as a play thing. After the second night, there was litter everywhere, they had decided it was a GREAT play thing! So the third night, I tried a different approach. I emptied the litter from the tray, and went into the garden and took a couple of shovel loads of dirt from the garden and put into the tray. I then took this back to the house, put it in the room where the kitties played and slept, and as soon as I put it down, Siggy, the white kitten, jumped in. The next morning, no mess, but the litter tray had been used. Success!! So we are now happily in a routine where they are in the garden in the day and eat and play and sleep inside at night.

I found out they are the product of a stray cat who lives up the road. She must have been moving them and for some reason was scared away, as I have not seen her at all. The mother is well known in a part of the suburb as she was left when her owners departed the house they were living in and people in the area had been feeding her. I intend to encourage her to our house so I can get her desexed and will care for her as well. Meanwhile, the kittens are beautiful, they are learning to relax and are very happy racing around the house as only kittens can.

I managed to encourage the mother to our house when the kittens were about a year old. I took her to the vet, got her desexed and vaccinated and she now lives with us as well. The two kittens are a permanent part of my family. Leo is black and white and Siggy is white and black. They are both very adventurous and love the garden……..oh and they are both very cute.

We had a wonderful holiday knowing Taxi was being cared for in her own home. We came home to a very relaxed and happy dog, and that made us feel so good. I had always been anxious about leaving her before, but now I have no worries.  Thank you until next time. - Amy 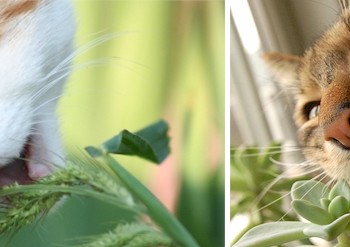 Travelling With Your Pet 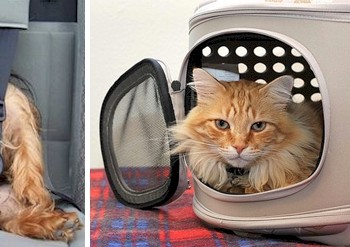